I am in a Yoga teacher-training program.

There. I’ve put it into the world. 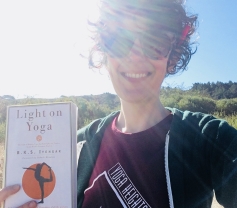 This is something I never considered except more than a fantasy on highly stressful days: “I could give up working in theatre, become a Yoga teacher, move to a remote small community within a few hours driving distance of San Francisco, open a small studio, and finally be at peace.” (LOL. How’s that for an escape daydream? At least I would be closer to my adorable niece.)

It took an inquiry from my home studio’s owner, numerous back-and-forth emails with her, casual conversation with studio staff and instructors, raising the idea with my spouse (and him even raising it with me), and my work schedule finally settling… it took all that for me to sign up for teacher training. Which means it took nearly six months for me to get comfortable with the idea that I would have to tell people I was in a Yoga teacher-training program.

I still might not be comfortable but the cat is pretty much out of the bag.

I’ve had a flirtatious relationship with Yoga for two decades, but only for the physical benefits. It was a friends-with-benefits affair with Yoga in which I took from what I wanted, gave nothing in return, and didn’t consider for a second what I was ignoring about Yoga.

Yoga, I’m sorry I treated you this way.

Then, two friends, each with their own more intimate relationship to Yoga, encouraged me to turn to my mat during a period of professional upheaval and turmoil. Thank goodness they did. In hindsight, I internalized that “unrest” and, along with numerous emotional hits I took for the greater good, calcified it in most crevices of my body and being.

In summer 2015 I did as any internetworked individual does: I searched “yoga studios close to me” and scoured reviews. This landed me at Petworth’s Yoga Heights (YH). I dated around with Yoga at YH with “unlimited classes for three-weeks.” I dated with intention buying a “one-month unlimited class pass.” I committed more when I traveled to Omaha, NE and spent six glorious weeks with the instructors at One Tree Yoga. I recommitted at Cincinnati’s The Yoga Bar and Raleigh’s Blue Lotus studios, and then always rejoiced returning to my YH. I started introducing YH to friends; some of them introduced me to people who I practiced with multiple times a week. I settled into my mat and practice with effort and ease.

During my un-calcifying phase, Yoga revealed itself to be a home, to be community, to be family. But really, it was only because I revealed myself to Yoga. I realized I’d not considered Yoga in its entirety. I wanted less, I gave more.

Yoga: thank you for your patience with me.

Except when I attend Yoga class.

Or, at least, that’s what I’m doing now. I am giving myself to my teachers. I am allowing my instructors to hold the space so they can create an environment for me to be vulnerable. I am creating and holding space only for me. This feels selfish and self-centered. It is. I need it. I really need it. To continuing being the person I am in the world.

So yes: I am in a Yoga teacher-training program. But it’s for me and Yoga, cause there’s something there.

Thanks for sticking with me Yoga. I got your back.

Svādhyāya is a one of the five Niyamas (or personal, internal practices). “Sva means self and dhyāya means study or education,” explains B.K.S. Iyengar in Light on Yoga. “education is the drawing out of the best that is within a person. Svādhyāya, therefore, is the education of the self…. The person practicing svādhyāya reads his own book of life, at the same time that he writes and revises it. There is a change in his outlook on life.”