I saw this image on FaceBook a lot Saturday and Sunday:

It reinforces what I read and heard repeatedly about the White people featured in it and their peers—“Racists are evil.”

So. Robin DiAngelo calls this mental gymnastics maneuver the “Racist/Not Racist” binary. It reinforces that the “people who commit these acts are considered racists; the rest of us are not racists.” Here’s the way Robin breaks it down in her book What does it mean to be White? 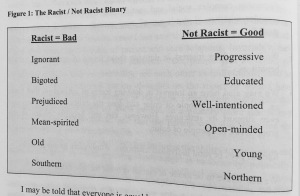 I like to shorthand this the “Good/Bad” binary. Because being associated with racism brings up all sorts of uncomfortable feelings for White people, and makes us feel like we’re associated with those hate mongering wack-jobs and no one wants to feel like that!

But friends, all White people are racist. This is the face of racism in the United States too: 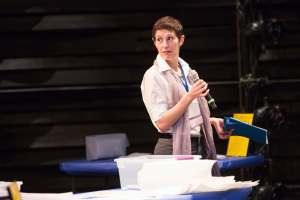 And the sooner we start confronting that directly—which involves working through the endless swamp of discomfort—the sooner our life-long journey toward being a White Anti-Racist begins.

Not gonna lie, I had a strong distasted for the word “supremacy” and the term “White Supremacy” for years. I avoided it completely. I used White Privilege, acknowledging my own. I would say White people in America are the dominant or majority group in a systemically racist country, and acknowledge I was White. But I would not say ever that I was part of White Supremacy.

Over time, I recognized I was holding my personal anti-racism development back because of it. Even though I was “woke” (as the kids say) I was still deeply rooted in the Racist|Not-Racist or Good|Bad binary. Supremacists and supremacy are the same when you’re stuck in the binary. “Supremacists” were bad. “I” was not one of “THEM.” I didn’t really categorize most White people as one of “THEM” either. And therefore, that phrase “White Supremacy” couldn’t be true.

It’s hard to admit that only a year and half ago did I realize the complex gymnastics I was engaged in to avoid confronting my own racism. I was othering “White Supremacists,” making them “bad,” differentiating them from me so that I could be “not racist” and “good.” It was a sign of my White Fragility.

To this day and for the rest of my life I’ll remain entangled in the “racist = bad | not racist = good” binary. But I know that I can see systemic racism more clearly after having accepted that there is White Supremacy in the United States. It means I see the dynamics for what they are: a legacy established by White people at the expense of People of Color that is still active to this day. That’s White Supremacy.

So let’s circle back to that “appropriate outpouring of condemnation” filling my social media newsfeeds. Please condemn the abusive and violent behavior that occurred this past weekend. But what actions can we balance our declarations with? Let’s make sure that we are not tolerating the open and obvious demonstrations of racism and race-motivated hate crimes in Charlottesville, as well as not tolerating the camouflaged or obscured demonstrations of racism in our workplaces and homes.

My dear fellow White people, we too are the face of racism.

We too are White Supremacy Culture.

Now let’s do something about it.

By JLove Calderon and Tim Wise

Sponsored by SURJ-Showing Up For Racial Justice

Excerpted from Occupying Privilege; Conversations on Love, Race, and Liberation