By their actions, they did not dream the American Dream, they willed it into being by a definition of their own choosing. They did not ask to be accepted but declared themselves the Americans that perhaps few others recognized but that they had always been deep within their hearts.

Minutes ago I finished the wonderful book The Warmth of Other Suns by Isabel Wilkerson. The book examines the migration of Black U.S. citizens from the South to northern and western cities between 1915 and 1970. It’s one of the most rich, involving, relevant, scholarly, and smooth-reading non-fiction books I’ve read, possibly ever.

This post opens with the closing sentences of the epilogue from Other Suns. Before I go further, I need to honor Wilkerson, this book, and the lives of close-to six million Black people it chronicles. Thank you.

As an author–an artist of written English–Wilkerson’s words stuck me deeply, like deeply, because of their immediate, contemporary relevance. With tremendous respect to her and those she was writing about, I’d like to rearrange them a little here:

“By their actions, they willed into being a definition of the American Dream of their own choosing. They declared themselves the Americans they had always been deep within their hearts.”

Ponder this for a moment? As if you were one of the “their” and “they” referred to.

So the quote from Other Suns reminded me of this declaration:

The world is full of intellectuals, but it is in need of reckless imagination.

It was made by Pastor Michael Walrond (“Pastor Mike”) of Harlem’s First Corinthian Baptist Church during a keynote he gave at a Theatre Communications Group convening in 2015.

It was part of larger speech about artists being “cultural architects” positioned to “help people learn to see the best in themselves and help them see the power in who they are.” Cultural architects can help “reimagine this world and trust me, I tell people all the time, the wounded soul of this world is groaning for more creative beings”

Ponder this for a moment? In light of my rearranging of Wilkerson’s words.

Increasingly over the last year and half, more United States residents are experiencing feelings of dissatisfaction, betrayal, rage, confusion, discomfort, and, most importantly, a need to do something. An internal need to act.

And there’s been platforms and opportunities like Shaun King’s Injustice Boycott, Van Jones’ Love Army, the Women’s March, and the amazing Safety Pin Box through which people can take actions of all sizes and durations.

On an individual level, people are also seeking out more meaningful conversations with others that bridge rather than cleave. Worldview-expanding dialogue is happening more at the water-cooler, in coffeeshops, in our homes, and, yes, even on Facebook than before. People are seeking to square the country they thought they were living in, with the one they appear to be (or, let’s face it, are) living in, with the citizen they want to be.

Who is supporting the shaping of a definition of the American Dream of the people’s choosing? Who brings people in communion so they can investigate this “thing” that is deep within their own hearts? Who has the tools to foster the shaping and transmitting of declarations of what it means to be American? In a world full of intellectuals, who is fueling and compelling us forward with reckless imagination?

Art connects people. Art highlights the vibrancy of our cities. Artists can and should play an integral role within their home communities and the country at large. Artists have the power to convene. The power to imagine-with. The power to rally, support, and advance.

The American deep within my heart is one who believes that art saves lives. It believes we should call forth artists, evoke the service of art; maybe even demand it.

The American deep within my heart believes our country should support the arts and humanities. Because we need it more than ever. 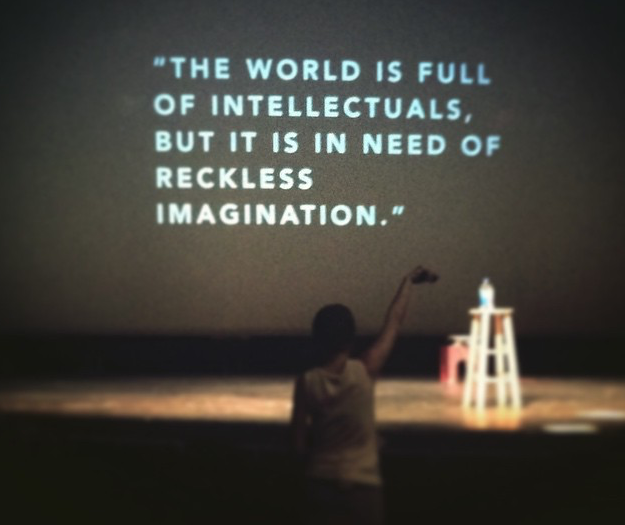 Or, if you must go the TL;DR rout, here are bullet points of the article distilled by Jamie Bennett on Facebook: