DISCOVERED!: The Amazing Untold Stories of Catenarians was created during dog & pony dc’s year as Creatives-in-Residence at Washington, DC’s National Building Museum. Rachel Grossman co-conceived of DISCOVERED!, was the primary playwright, and director. She also appeared in the show. DISCOVERED! was equal parts audience integrated performance, museum theatre, and creative dramatics workshop. The show was developed to compliment the 2017 summer installation Hive, designed by Studio Gang. DISCOVERED! supposed that Hive, which utilized catenary curves in its design, formed a magical portal to a previously unknown world called “Catenaria!” The four person cast included one actor who was Deaf and all four performances were ASL interpreted. Rachel created the interpreter prep guide. 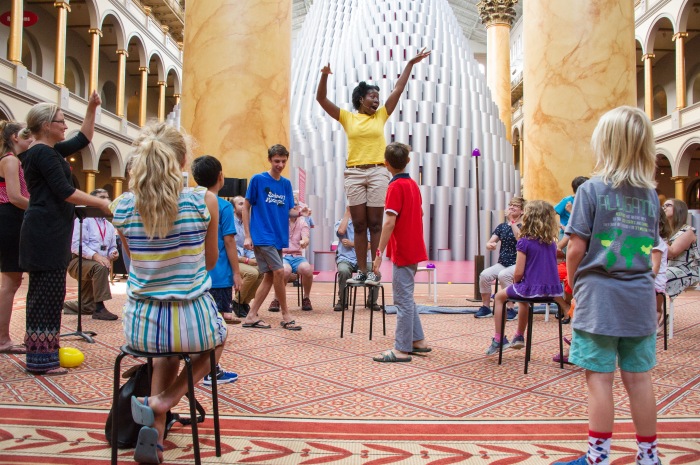 Show Description: The National Building Museum’s installation of Hive unknowingly formed a portal to a previously unknown world–CATENARIA! The Museum sent us, their Creative-in-Residence theatre company, into the portal across space and time and we’re about to come back to Earth to tell you all about our visit. We’ll share with you all the wondrous buildings we saw and how Catenaria came to exist. Then, in groups, we’ll create performances to show every day life in Catenarian.

[T]he opportunity to work with [Rachel] as a mentor was the most worthwhile part of the programme and I was particularly grateful for the way [she] really challenged our thinking.

Rachel’s productions are both visceral and thoughtful, creating a unique tension in the space and allowing for all to have agency in the storytelling that is happening.