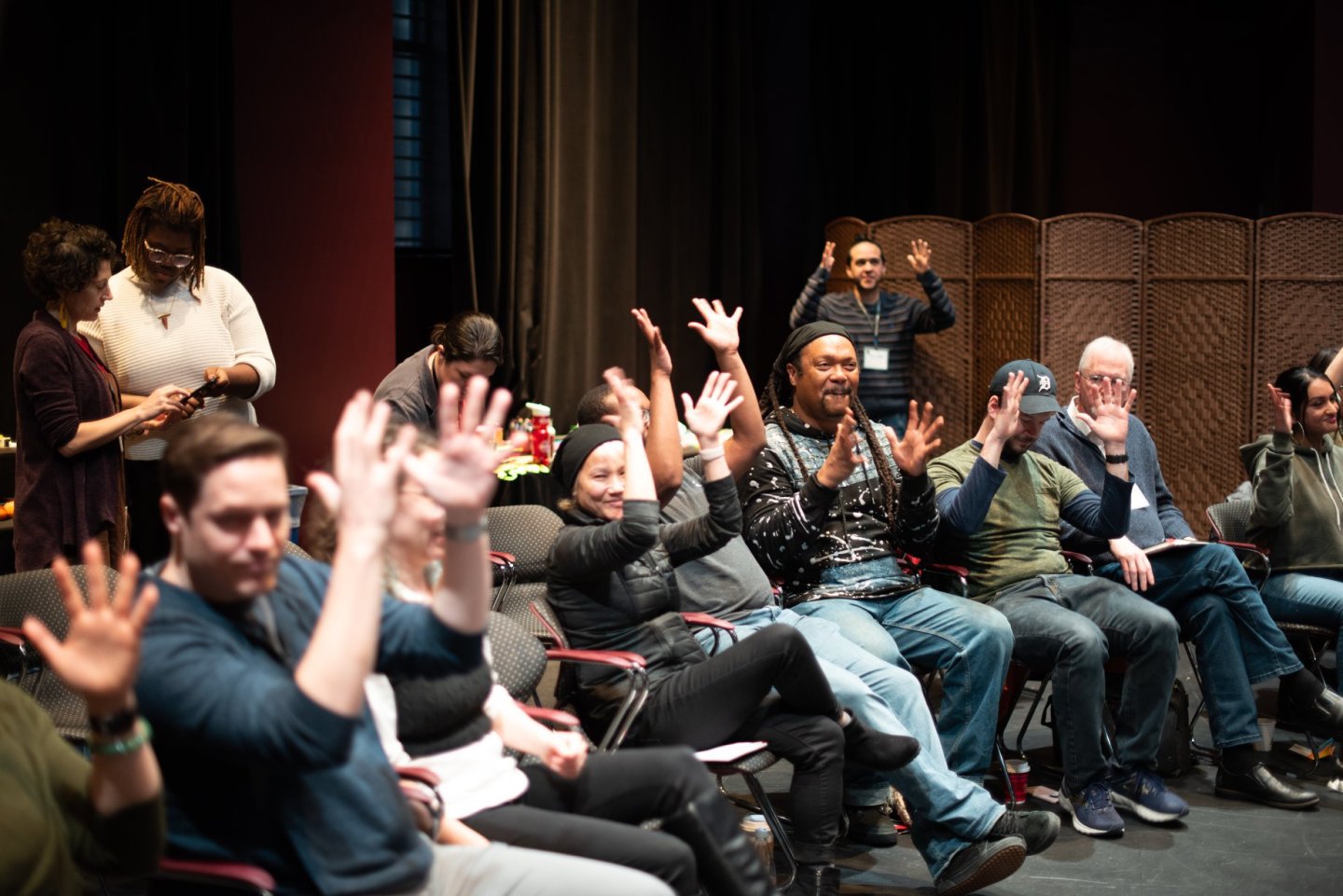 Never doubt that a small group of thoughtful, committed citizens can change the world; indeed, it’s the only thing that ever has.
—Margaret Mead

A revolution that is based on the people exercising their creativity in the midst of devastation is one of the great historical contributions of humankind.
—Grace Lee Boggs

Inscribed with quotes from Margaret Mead and Grace Lee Boggs at the top of the page, on April 12, 2017 HowlRound Theatre Commons posted an open call for convening proposals. Called the “HowlRound Challenge,” the open call would lead to the producing and hosting of up-to “five in-person convenings in Boston, from September 2017 to June 2019 that will incubate ideas and seed action to make a better theatre and a better world.”

HowlRound is an open platform for theatremakers worldwide that’s frequently associated with its publication and distribution of digital content (written and video), as well as the creation and promotion of the World Theatre Map. Over the course of its lifetime, HowlRound has supported the convening and/or co-convened a number of gatherings. But the “HowlRound Challenge” open call was a first. It would allow this brilliant, reflective, continually evolving group to utilize its resources, experience, and skills in new and different ways, placing HowlRound in more direct service to the desires of the theatremaking community as articulated by its members. #exciting #emergent

As soon as I got word of the HowlRound Challenge, it seemed a prime opportunity for Deaf theatre artists to gather on a national level, if they so chose. The last national-level gathering was in 2016 by National Endowment for the Arts (NEA) for a single afternoon to discuss “barriers, needs, and opportunities for American Deaf theater artists.” A report was distributed; there were no next steps. (I was invited to this gathering but, due to illness, couldn’t attend live. I listened to the afternoon’s discussion via FaceTime through a friend’s computer.) The gathering was a number of years prior and was less officially affiliated. As it was explained to me, a few action steps came out of a day of discussion; however, lacking national-level accountability and infrastructure, there was little “action.” The history of convening continued back in time on a similar pattern.

With this base knowledge, I brought the application to friends’ attention with the thought of an action-oriented session that centered Deaf theatre makers and producers creating a plan that they would hold themselves accountable for executing.  The shape of the proposal was co-written by a group of 8 individuals, and co-written/edited/revised by approximately 15 people all together. It was submitted by myself, Tyrone Giordano (CSD Inc., dog & pony dc), DJ Kurs (Deaf West Theatre), and Ethan Sinnott (Gallaudet University).

After two video interviews and many fingernails gnawed to the cuticle, on October 3, 2017 it was announced the Deaf Theatre Action Planning Session (DTAPS) was selected and would occur in Boston March 2019.

Planning started with the four of us applicants plus Ramona Ostrowski and JD Stokley as the producing team. It continued in 2018 with Patty Liang (Deaf Spotlight) and Alexandria Wailes (independent artist) joining the producing and facilitation team.

DTAPS convening took place 15-17 March 2019, hosted by HowlRound in partnership with Tyrone Giordano, DJ Kurs, Patty Liang, Alexandria Wailes, Ethan Sinnott, and Rachel Grossman, This convening was a gathering of thirty Deaf theatre producers and administrators from across the country, intended to develop a future-focused, action-oriented plan for creating a national network and training-to-production “pipelines” that foster the long-term education and advancement of all Deaf theatre artists.

An overview of the convening’s schedule with archived video can be found on this website.

Here’s a list of the participants at DTAPS, March 2019.

This is a report of the gathering written for HowlRound by Jill Bradbury, titled “Creating an Intersectional Future: The Deaf Theatre Action Planning Session.”

We the DTAPS participants are just beginning to understand the scope of what’s possible and how to begin tackling it, one moment of change at a time. There will be more to share here in the future about lessons learned and projects emerging. Sooner rather than later.

For me, a hearing and sighted artist and producer, this project has been a tremendous gift. I’m so privileged to be permitted to contribute my past experience planning gatherings, and to attend as a participant. I learned many lessons, sometimes moment to moment, about how to show up as an ally, accomplice, and advocate. I continue to learn the fluidity of these roles to the day I write this. I am not a Deaf theatre artist.  I’ve been a producer of Deaf and hearing theatre. I’ve been a member of a production team for DeafBlind performances. I am a supporter of Deaf theatre in any and all forms Deaf-identified individuals wish to make it.

And if you want to know more about Deaf theatre, find a person who identifies as a Deaf theatre artist. I’ve got a list if you need recommendations. #deaftheatre

My mentor [Rachel] taught me reflective practice and small, scrappy experimenting. Talking through [with her the] techniques of working with people was so useful. Rachel shared resources and helped me to look at ideas grounded in theory and deeper knowledge (like the history of [the term] “intersectionality”).

Rachel puts in the work to get to know people in the community. She attends local events, meets people and, most importantly, remembers them. There are so many times Rachel has connected people she has met to other artists and projects in the community.